A Brief History of Loyola University Chicago's Department of Pharmacology 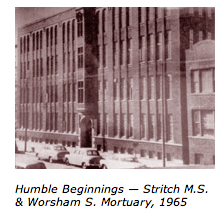 Loyola University Chicago entered the area of medical education when it assumed the operation of the Illinois Medical School in 1909, and that of the Bennett and Reliance Medical Schools in the following year. In 1915, control of all three institutions passed to Loyola's board of trustees.

The Department of Pharmacology of Loyola — originally called the Department of Materia Medica and Therapeutics — was a component of the Chicago College of Medicine and Surgery, the last acquisition of Loyola's Medical School in 1917.

The Loyola University Medical School operated out of a dark-red ornamental brick building at 706 South Wolcott Avenue, next to the Chicago Medical School and across the street from the 2,500 bed Cook County Hospital. The building had been constructed in 1877 for Women's Medical College, an affiliate of Northwestern University, which sold it to the Chicago College of Medicine and Surgery in 1902. Our department, now called the Department of Molecular Pharmacology and Therapeutics, gained space by annexing an old adjoining building, the Worsham College of Mortuary Science.

In 1948, Loyola's Medical School was renamed the Stritch School of Medicine in honor of Cardinal Stritch, one of its great benefactors. Twenty years later, in 1968, our department moved westward into two vacant red brick buildings at the Hines V.A. Hospital complex. No. 116 became the Medical Laboratories Building and No. 135, about a half-mile away, housed the Institute for Mind, Drugs, and Behavior. The following year we moved to 2160 South First Avenue in Maywood, where the present medical school and hospital structure was newly-built on a 60-acre tract of land obtained from the U.S. Veterans Administration.  The tract itself has an interesting history that predates its educational and health care purposes.  In the early days of the century, it had been first an automobile race track, then later became the old U.S. Maywood Airport, from which Captain Charles A.  Lindbergh inaugurated the U.S. Airmail Service to St. Louis in April 15, 1926. 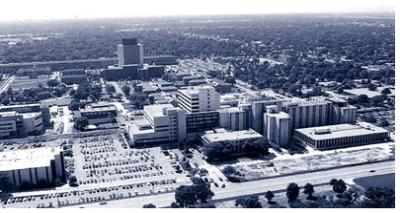 During World War II (1943-1945), H.N. Ets, PhD became the first chairperson of the separate Department of Pharmacology. R. Mendez, MD, became the acting chair in 1945 and left in 1948 to head the Heart Institute of Mexico.

Y.T. Oester held the chair from 1949-1956, leaving to become director of research at Hines V.A. Hospital; in 1950 "Tom" Oester received permission from the Graduate School to initiate a training program in Pharmacology. C.D. Proctor, who later became professor and chairperson of the Department of Pharmacology at Meharry Medical College, earned Loyola's first PhD in Pharmacology.