Caring for those who serve – and the underserved 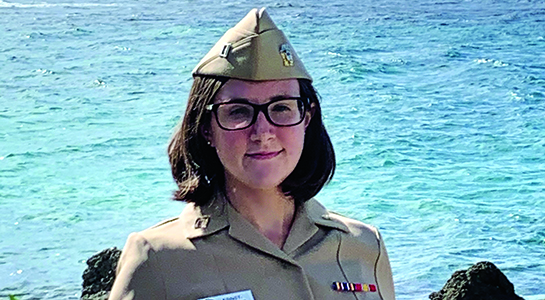 Elizabeth Ernst-Signore (MD ’14) answers the phone with a cheerful, “Good morning!” It’s 6:30 a.m. in Guam and a humid 60 degrees, a stark contrast from the snowy blanket that covers her alma mater more than 7,000 miles away.

Guam is a U.S island territory in the western Pacific, well known for its naval base that encompasses over a quarter of the island’s land and houses half of the residents. In the medical community, it is recognized for the base’s family hospital, where Ernst-Signore serves as the youngest obstetrician-gynecologist on staff.

“I’ve always wanted to serve in an area that was historically underserved and meet patients’ needs that otherwise might not be met,” says Ernst-Signore. “Here in Guam, we’re not only able to serve the military and its families but also provide care for a large part of the local population. It meets a big need.”

“Loyola believes effective medicine cares for the whole person, and I do too.”

The alumna caught the service bug during her time at the Stritch School of Medicine, where she joined an ob-gyn interest group that visited local clinics in the Maywood area every month. Ernst-Signore witnessed her professors and advisors donate hours of their time outside of already busy work schedules to serve as gynecology specialists in clinics that didn’t otherwise have them. “The attending physician would volunteer their own time on a Thursday night after a full day of work; that was just so inspiring,” remembers Ernst-Signore. “They not only cared about serving the population that needed it but also fostering the same ethos of care in their medical students.”

It’s the same skill and passion that Ernst-Signore wants to instill in other young medical students. Her dream is to come back to Stritch and teach the next generation of physicians. She says her age is a valuable tool that would allow her to relate to tired, and sometimes discouraged, residents.

“Being just two years out of residency, I can still recall the stress of being a resident,” she says. “It’s nice to be that young attending physician who can relate to them. I want to experience the joy that comes from witnessing their first C-section, or show them how much fun it is to deliver a baby.”

So far, Ernst-Signore and her team have completed more than 350 deliveries. The number is a bit lower than an average hospital, but one of the highest for a naval base. Many military families stationed at Guam will have at least two children before their tour is up, earning it the nickname “the two-kid tour.”

On top of naval families, Ernst-Signore works in the emergency room where locals are treated if their situations are especially dire. She recalls taking care of a patient who was in a car accident at 33 weeks pregnant. When those frightening situations occur Ernst-Signore, who considers herself a shy person, uses the skills and knowledge she learned from patient-centered medicine courses at Stritch. “Loyola believes effective medicine cares for the whole person, and I do too,” says Ernst-Signore. “Pharmacology, anatomy—it’s all important, but most of what I do now is talking with patients and reassuring them. It’s uncomfortable to be thousands of miles from home. Honestly, these military families are sacrificing just as much as the service members and it’s rewarding to be able to serve them.”