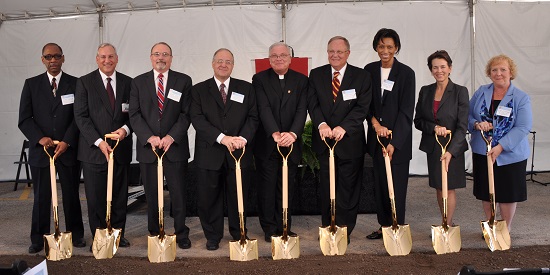 Michael J. Garanzini, S.J., president and CEO of Loyola University Chicago, said one of the biggest challenges in health care is acquiring new knowledge and producing great doctors and nurses. “This new Center will transform the practice of Catholic health care education and research for the benefit of students, patients, and our society as a whole."

Richard L. Gamelli, MD, FACS, senior vice president and provost of Loyola’s Health Sciences Division, told nearly 300 scientists and dignitaries: “It is almost certain that someone in your life – possibly you – will benefit from the work that is done at this health sciences campus. Patients right across the street and around the world will be able to enjoy healthier lives, thanks to Loyola health sciences. Excellence in research translates into excellence in patient care.”

Larry Goldberg, president and CEO of Loyola University Health System said: “This is about discovery, and translating that discovery to the patients who we serve. Bringing together this collection of researchers and clinicians to really build something great. . . will bring us forward for the next 10 to 15 years.”

The center will include open laboratory and support space for 72 principal investigators plus space for 40 lead scientists engaged in desktop research such as public health, health services, nursing, bioinformatics, and epidemiology. A 250-seat auditorium will provide a link with the local community, serving primarily as a showcase for health-related programming.

In 2011, Trinity Health (now CHE-Trinity) acquired the health system from the university. As part of this agreement, the university and CHE-Trinity will share the cost of a $150 million research enterprise, comprising the $137 million building and funding to attract and support leading researchers.

Researchers now scattered among buildings throughout the Health Sciences Campus will be centralized in the research and education center. The center will be built on what is now a parking lot between the medical school and an office building.

In addition to Father Garanzini, Dr. Gamelli, and Larry Goldberg, other members of the partnership who handled ceremonial groundbreaking shovels were: