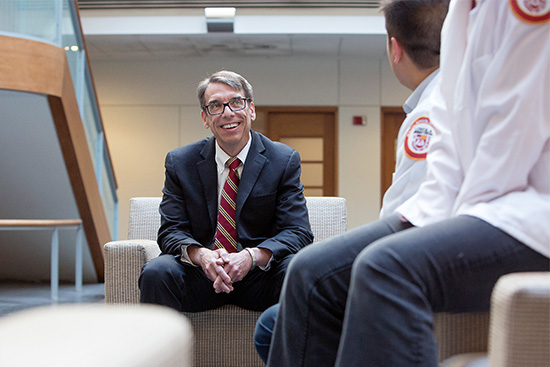 Mark Kuczewski, PhD, is the Fr. Michael I. English, S.J., Professor of Medical Ethics and the first director of the Neiswanger Institute for Bioethics and Health Policy. (Photo: Natalie Battaglia)

Doctors, nurses, and other health care professionals confront ethical dilemmas every day, at all stages of care. Take the example of a patient injured on the job, who needs to go to a long-term rehabilitation center, but is undocumented and does not qualify for Medicaid, which is how other patients would pay for the treatment. What responsibility does a hospital or health care team have to provide care for this patient, even if the person cannot pay?

Bioethics experts like Stritch School of Medicine professor Mark Kuczewski, PhD, analyze these types of situations, help establish hospital policies, and offer guidance on public policy about health care and insurance. In this case, Kuczewski says, “justice requires that we sever the tie of health insurance from social categories such as immigration status.”

“Bioethics — which literally means life ethics — is a bottom-up approach that begins with human experience and involves considering and exhaustively analyzing clinical cases,” says Kuczewski. “It contrasts with traditional philosophical ethics, which starts with abstract theory and principles and tries to apply them to policies and cases.”

In the course of his work, Kuczewski often encounters patients in moments of life and death, whether it is at the beginning or the end of life.

“These are moments in people’s lives when they are most vulnerable, and it is a privilege to accompany and assist such persons,” he says. “For instance, as a patient nears the end of life, they are often scared and confused, and their family members struggle to be good advocates. To be able to work with them at such a moment and help them come to decisions that express their values, wishes, and spiritual traditions is a genuine privilege.”

This respect for the dignity of all people is the driving force behind Kuczewski’s commitment to ending health care disparities among different populations. For his standout work in this area, he was named 2017 Faculty Member of the Year. Kuczewski received the award, alongside co-winner and professor of social work Maria Vidal de Haymes, PhD, at the Faculty Convocation on Sunday, September 10.

At Loyola, Kuczewski is the Fr. Michael I. English, S.J., Professor of Medical Ethics and teaches courses on clinical bioethics, ethics across the care continuum, and organizational ethics. He is also the first director of the Neiswanger Institute for Bioethics and Health Policy, which launched in 2000 and offers online master’s and doctoral degrees and certificates in bioethics, with a focus on social justice and the role of religion and spirituality — in particular, the Roman Catholic tradition — in medicine. A past president of the American Society for Bioethics and Humanities, Kuczewski is a pioneer in online bioethics education and has created two online graduate programs in the discipline.

In 2013, Loyola became the first medical school in the United States to accept applications from students with DACA (Deferred Action for Childhood Arrivals) immigration status, after Kuczewski advocated for the decision among University administrators. He sees it as a natural extension of his work in bioethics.

“We know that health depends on many social determinants, including access to basic opportunities in our society. Those who live in socioeconomically deprived situations and have barriers to the basic goods such as education and employment opportunities because of their immigration status live very different lives from those of us who have access to such privileges,” he says. “To leave people cut off from full participation in our communities for decades is a denial of social justice that will have health and life expectancy consequences.”

Johana Mejias-Beck is one of many students that Kuczewski has mentored and encouraged. She has worked with him as a member of the Bioethics Honors Program, as well as on her capstone project about physicians serving as allies to undocumented immigrants, which they will present together at a national ethics conference this year.

“When Mark came along, he not only believed in me, he believed in the importance of making a statement across the nation about the importance of diversifying our health care system at the medical school and beyond, and that immigration status should not be a limiting factor,” Mejias-Beck says. “I remember him saying, ‘It’s just the right thing to do.’”

Kuczewski feels fortunate to work at Loyola, where he says commitment to social justice and Jesuit, Catholic values permeate the university and health system.

“The Jesuit and Catholic heritage of the University, the medical school, and the health system create an unparalleled work environment,” Kuczewski says. “Stritch attracts a certain kind of student – one who is interested in giving of themselves to genuinely serve people in need. As a result, the kinds of discussions and projects students undertake are focused on improving the quality of life of the least advantaged.”

Zarna Patel, another student, frequently stops by Kuczewski’s office for these kinds of discussions, and looks to him as a mentor.

“He always has good insight into what we are going through as medical students,” Patel says. “Even if I think I am just rambling about random experiences in clinic or classes, he always seems to know what’s at the bottom of our concerns before we do and succeeds in offering gentle guidance. Sometimes he offers book suggestions by medical authors that speak to concerns we may have about a specific specialty.”

Not only do Kuczewski’s students value his opinion, but the Faculty Member of the Year Award reflects the deep respect that his colleagues have for his work and teaching.

Kuczewski says he was both humbled and honored to receive the award, and says “In selecting Maria Vidal de Haymes and me as co-winners of the award, I believe that the Faculty Council is recognizing that the University’s commitment to our undocumented students and neighbors is central to living a ‘faith that does justice.’”