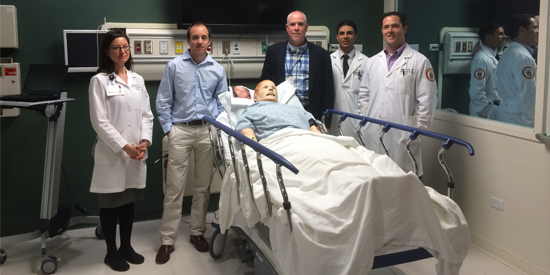 One of the most challenging cases that a first-year neurology resident physician can face is a stroke patient in the emergency department.

The physician must quickly decide whether the patient is a candidate for the clot-busting drug tPA, which can minimize stroke damage. But giving tPA to the wrong patient can make the stroke worse. There’s no time to waste, because in one minute, a stroke can kill nearly 2 million brain cells.

A new study indicates that using a high fidelity patient simulator and other simulation-based education techniques can significantly improve the knowledge, skills and confidence of first-year neurology residents.

Simulation-based medical education (SBME) enables students, residents, nurses and other medical personnel to practice under safe, controlled and forgiving conditions. Previous studies have found that SBME is superior to the traditional style of medical education and has shown improved outcomes of knowledge, skills and behaviors.

The Loyola study evaluated SBME for teaching neurology residents how to treat stroke patients. Six incoming residents participated in a simulation of a stroke patient arriving in the emergency department. The resident physician managed every step of care, including assessing the mannequin-patient, paging other members of the stroke team, ordering and interpreting lab tests and CT scans, etc. The simulations were performed during the first and third weeks of the residents’ orientation.

The physicians’ skills improved significantly from the first to the third week. Surveys given to the residents showed their confidence also improved. The new physicians also showed a 16.1 percent improvement on a multiple-choice test about treating stroke patients in the emergency department.

Authors of the study are Rick Gill, MD, (first author); Esteban Golombievski, MD; Michael Star, MD; Matthew McCoyd, MD; and Sean Ruland, DO (senior author). Drs. Gill and Star are neurology residents at Loyola University Medical Center; Dr. Golombievski is a vascular neurology fellow at the medical center;  Dr. McCoyd is an assistant professor; and Dr. Ruland is an associate professor in the Department of Neurology of Loyola University Chicago Stritch School of Medicine. Viva Jo Siddall, MS, RRT, RCP of the Center for Simulation Education, guided the authors in setting up the simulation-based model.